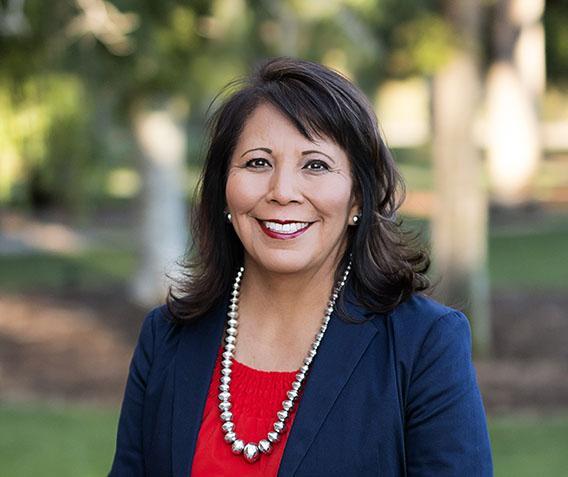 Karen Francis-Begay is the Assistant Vice Provost for Native American Initiatives at The University of Arizona (UA), a role where she leads and coordinates campus-wide programming efforts to support Native American students and faculty.

Karen was born and raised on the Navajo Nation, mostly in Chinle, Arizona where her high school mascot is the Wildcats. Her maternal clan is Tábąąhá (Edge of Water) and paternal clan is Kiyaa’áanii clan (Towering House). Her maternal grandfather’s clan is Naakaii Dine’é (Mexican People) and paternal grandfather’s clan is Honágháahnii (One Who Walks Around You).

Karen is a proud second generation graduate of the University of Arizona with a Bachelor of Science degree in Public Administration and a Master of Arts degree in American Indian Studies. She currently is a PhD candidate in Higher Education at the UA and is near completion of her dissertation titled, “Between virtual roles and sovereign worlds: The lived experiences of tribal liaisons at public universities.”

Prior to her current role, Karen was the Assistant Vice President for Tribal Relations at the UA. In this capacity, she served as a liaison between Arizona’s tribal leadership and the university. Karen also served as the Director of Native American Student Affairs and the Associate Director of the American Indian Language Development Institute (AILDI) at the UA.

In her 32 years as a higher education professional (28 with the University of Arizona), Karen has extensive knowledge and experience in program coordination, policy development, college student success, and working in partnership with diverse stakeholders to develop culturally attuned and culturally relevant postsecondary education programs in partnership with Native Nations. She also co-developed the Arizona Board of Regent’s Tribal Consultation Policy and provides support on tribal consultation.

Karen’s published works include two book chapters, one titled and co-authored, “The First-Year Experience for Native Americans: The University of Arizona First-Year Scholars Program,” and the second, “Special Advisor to the President on American Indian Affairs” in the book Beyond the Asterisk: Understanding Native Students in Higher Education (2013).

She has served on many national and regional boards to advance educational opportunities for Native American students and for women of color. Her professional service has been recognized by national and local organizations such as the Flinn-Brown Leadership Academy who presented her a 2018 Arizona Champion Award for her commitment and contributions to Arizona’s Native Nations.